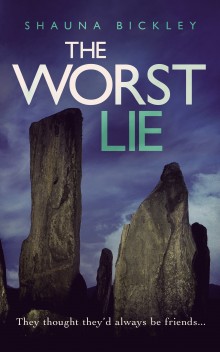 Madelaine had everything she wanted.
Friends, a successful film career, and a loving boyfriend.
Then she was dead.

Lexie’s friend Helen was part of a close-knit group at university. Now, ten years later, Helen is uneasy when another of the group suggests a reunion.

Another of the friends reveals to Lexie that they believe their long-dead friend, Madelaine, was murdered, and they intend to find the killer. This causes Lexie to engineer an invitation to their get-together.

Relationships are strained and tensions simmer during the weekend reunion at Little Stillford, the ancient stone circle where Madelaine’s body was found. Everyone is relieved when the weekend is over until another of the group is murdered at the stone circle.

Each of them has secrets and each lies to Lexie.

Then a third member of the group is murdered.

Is the killer one of the friends, or is someone targeting them?

This is the second book in A Lexie Wyatt murder mystery series.

“… A psychological study of relationships built on lies.

The Worst Lie was a fantastic read that had me gripped from beginning to end. The characters were skilfully brought to life and genuinely seemed real. The plot was twisty and intricate, with all kinds of shenanigans going on. It was difficult to distinguish lies and cover-ups from truth and fact — a sure sign of a quality piece of work. I was on the edge of my seat trying to figure who out who did what to whom. A suspenseful and enjoyable read.