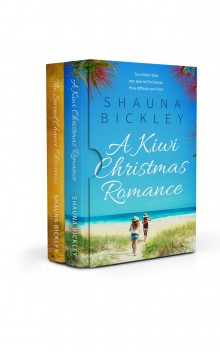 Two sisters plus one special Christmas. How hard can it be?

Lauren and Poppy Munro are set to spend the Christmas holidays with their parents in the small town of Clearwater Bay on the Coromandel Peninsula in New Zealand.

December brings the start of summer, and Lauren, an uptight workaholic, knows she can’t miss Christmas with the family again. But can she get through the holidays without them finding out that she’s lost her job?

Lauren always keeps emotions at a distance, the further the better, and this Christmas she’s focussed on managing her job anxiety levels. But when she bumps into Dylan, one of her old high school group, keeping her emotions under control becomes just about impossible.

Meanwhile, Poppy has finished with her boyfriend after discovering he was married. She has no intention of letting anyone else fool her. However, after saving a handsome holidaymaker from drowning, is she going to make the same mistake again?

A heart-warming read of romance, family, friendship and a different kind of Christmas down-under.

Two sisters. One secret. And a broken romance.

Can the Munro sisters still make this a special Christmas?

Last Christmas Lauren and Poppy Munro both found love, but with the approach of the current festive season problems are arriving faster than the sisters can cope with.

Lauren’s worrying nature is sending her anxiety levels sky-high. However, it’s not the thought of Christmas causing her stress, but the secret she can’t bring herself to share with Dylan.

Poppy loves Rob, but when he proposes to her unexpectedly he takes her hesitation to mean that the answer is no. Later, when she tries to explain, he believes that she’s bored with him and wants to finish their relationship.

As they gather for a family Christmas, can the magic of the season help them create their second chance?

As they gather for a family Christmas, can the magic of the season help them create their second chance?

If you love sweet romance then you’ll enjoy these tales of love, family and friendship, and a New Zealand summer Christmas at the beach.