Writing the Stars is the title of my new novel.

Anna is a woman trying to take charge of her life after dealing with a cheating boyfriend and losing her part-time job. Sure, other women have to deal with similar problems, but Anna also writes horoscopes! How did she miss seeing this in the stars?

Writing the Stars is a warm, light-hearted story for and about women who value their family and friends, their relationships and finding their place in the world.

The character of Anna King was born shortly after my husband mentioned that the wife of a colleague wrote horoscopes. My interest was piqued and I started thinking how an astrologer would deal with events they hadn’t expected in their personal and work life.

I’ve had a lot of fun and learned heaps while writing this book. I’ve researched astrology as well as style consultations and on-hold messaging, and if you want to know how all this fits in you’ll have to read the book!

For anyone who is a regular reader of this blog and its predecessor, you’ll know that (for me) finding the right title for a book can be as hard as actually writing it. This wasn’t completely the case with Writing the Stars but it did take me a little time. When I’m trying to come up with a title I go through the exercise of writing down words and phrases that encompass the main idea of the book and important character aspects. I also list significant words and phrases from the manuscript and anything else that comes to mind. From that I put together ideas for titles.

Writing the Stars is a romance, but it’s also very much about Anna and her best friend Corinne fulfilling their dreams. This and Anna’s horoscopes are the important ideas in the book. I actually came up with a lot of ideas for titles, but when I searched on Google most of them were already taken for books, films, and in a couple of cases, games. But a couple of walks and some inspiration later I had a title and now I can’t imagine it being called anything else.

Writing the Stars is ready for pre-order on Amazon and is released on 14th February—well, it is a romance at heart! 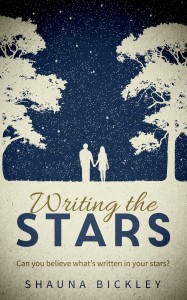