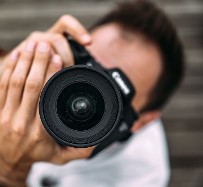 This week I’ve been subjected to a hideous ordeal. You know the one!

For the past month it’s been on my To Do list, but as it reaches the top I look at the words and shudder and then push it down to the bottom of the list. I’m sure you feel the same. It’s not a difficult task and only takes a few minutes, but the result lives with you for the next five years.

Yes, I need to renew my passport which means having a new photograph. I approach this with the same mix of trepidation and optimism on each occasion. Perhaps this time the photo will be marginally better than the one I’ve lived with for the past five years. Perhaps this time, I’ll have a photo that doesn’t make me look as though I’m on someone’s ‘Most Wanted’ list.

I recall one of the work contracts I had a few years ago that required a photo ID card to move around the building. I was whisked away to get the swipe card without anyone telling me it was a photo ID. They took me to a kiosk type desk down in the basement.

‘Stand against that wall. 3,2,1.’ That was it, not even a flash to let me know what was happening.

The colour selection was off, to say the least. I looked as though I’d been overcooked on a sunbed. To be honest, I was constantly surprised they even let me in the building, as I didn’t recognise myself from the photo.

As a postscript to this. I was recently in Auckland for a few days. A student sat next to me on the train talking to some of her friends across the aisle. Looking rather embarrassed, she pulled out a photo ID and showed it to her friends, giggling and talking. I didn’t understand the language, but I didn’t need to. The conversation was obviously of a similar nature to mine when I got home with my photo ID. The only difference was that her photo was good.