Over the past couple of months we’ve completed a few road trips around parts of the central North Island of New Zealand and I thought I’d share a few photos.

One of the trips was to Rotorua. A couple of months prior to our trip I wrote two short stories set in Rotorua, and it was wonderful to visit the area again and make sure I hadn’t used too much literary licence with the geography of the city. Rotorua has some beautiful buildings in the city but is also situated close to a number of beautiful lakes. I’ll be visiting Rotorua again in January for the Rotorua Noir crime writing festival. 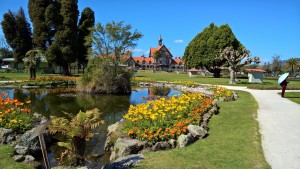 Government Gardens with Rotorua museum in the background

During the early spring, we spent a week exploring the Coromandel peninsula. Some places were familiar from previous visits, but some we visited for the first time. The trip was purely for enjoyment, but a few weeks after we returned a character came to my mind, swiftly followed by a second and then a whole cast. The tale was a Christmas story and in New Zealand what better place to set it than the lovely Coromandel. Parts of the Coromandel peninsula are a two to three-hour drive from Auckland, and so it is a popular holiday destination for many with beautiful beaches and lots of forest for bush walks.

The main setting of the book, Clearwater Bay, is a fictionalised town but the rest of the settings are real. Here are some of the places and images that add to scenes in the book. 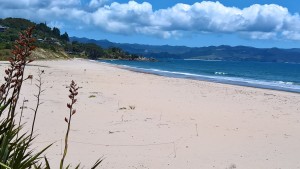 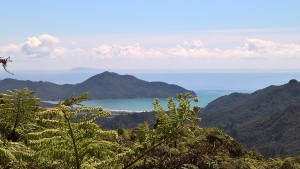 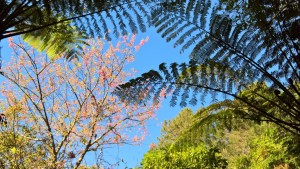 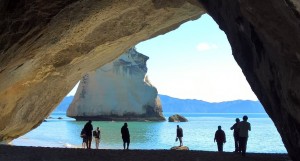 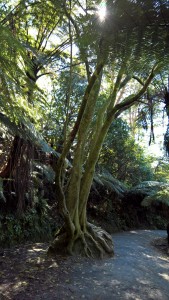 The image of the ferns and tree branches against the sky was taken on the path to Cathedral Cove and I used that image in a scene where Lauren takes a similar photograph. The interesting tree roots are also on that path and the photo next to the ferns is an iconic Cathedral Cove image.

When I first came to New Zealand it felt like the strangest thing to celebrate Christmas during summer.  It still does sometimes as so many Christmas songs are about snow and winter, and while I love Christmas lights they do feel a little out of place during the long summer evenings.

If you’re interested in reading a little about a summer Christmas wrapped up in a feel-good romance then try my new novel, A Kiwi Christmas Romance. 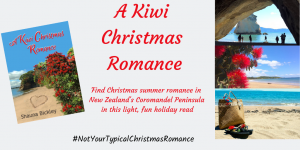 Lauren and Poppy Munro are set to spend the Christmas holidays with their parents in the small town of Clearwater Bay.

Lauren, an uptight workaholic, knows she can’t miss Christmas with her family again. But can she get through the holidays without them finding out that she’s lost her job and all the problems that has caused?

Poppy discovers her boyfriend is married when his wife, an important client, causes a scene at her work and attempts to get her fired.

In Clearwater Bay, Nell’s cafe is getting busier as tourists arrive for their Christmas summer break. Nell hopes her son Dylan will surprise her with a visit for the holidays, but when he does it’s the visitor he brings with him that is the real surprise.

While Lauren and Poppy are focused on the problems they left behind in the city, they discover that friends, both old and new, bring more than a hint of Christmas romance, as well as answers they weren’t expecting.

A heart-warming read about family, friendship and a different kind of Christmas down-under.